The Coolest Cake in the World

May 13, 2010
So this past Tuesday was my book’s official pub date, but it turned out that Monday, May 10th, was the much more exciting day. First, on Monday morning, I found out that The Beautiful Between was reviewed in Publishers Weekly (this is my favorite part): “Sheinmel makes an impressive debut with an absorbing tale of unlikely friendship, loss, and family secrets…the intriguing and well-defined characterizations will keep readers riveted.”

But Monday became even better that afternoon because the folks at my office threw me a surprise party in honor of The Beautiful Between. They even had a cake with the book’s cover somewhat magically reproduced in frosting. 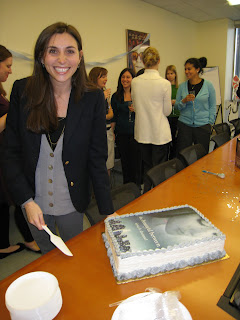 Now, I made my boss promise me that I wouldn’t have to speak at the party, because I was totally embarrassed, but if I had talked, I think I would have said something about how much I love Random House Children’s Books, how lucky I feel to work there, how much my life has improved – personally and professionally – since I began working there. After I graduated college, I wasn’t sure I would ever be good at anything other than being a student. But at Random House, I found mentors and friends, people who believed in me, who wanted to hear what I had to say, people whom I so respected that I wanted to work twice as hard for them. I honestly don’t believe I could have written The Beautiful Between had I not first worked at RHCB. I even started dating my husband soon after I began working there, and he totally used my new job as an excuse to ask me out, so if you think about it, I kind of owe my marriage to Random House, too.

So thank you, Random House Children’s Books, for making my life infinitely better, for being my home and my family, and for a cake with surprisingly delicious gray icing.

March 08, 2016
The annual New York City Teen Author Festival is almost here!   I’m so excited to be participating in a panel with a group of amazing authors on March 19th at the New York Public Library– details below! Check out the full schedule of events here . Teen Author Symposium Saturday, March 19th 1pm-5pm Bartos Forum, New York Public Library, Fifth Avenue at 42nd Street 1:10-1:40 – What Can YA Do About It? A discussion of how YA literature (and literature in general) can help social change, and the role this plays in works across a variety of genres. Featuring: Michael Buckley Donna Freitas IW Gregorio Brendan Kiely Daniel José Older Marie Rutkoski Scott Westerfeld Moderator: David Levithan 1:40-2:30 – The Secret YA Lives of Historical Figures In the spirit of Hamilton, let’s look at different historical figures through a YA lens. Featuring: David Arnold Sharon Cameron Heather Demetrios Jeff Hirsch AR Kahler Emmy Laybourne Hannah Moskowitz Meliss
Post a Comment
Read more

September 30, 2015
Welcome to YA Scavenger Hunt! In this post, you’ll find exclusive content from YA Scavenger hunt author Lyn Miller-Lachmann , along with a clue for Red Team .   Add up the clues, and you can enter for our prize—one lucky winner will receive  a book from each author on the hunt in my team !   (Including a copy of my new book, Faceless !) But play fast: this contest (and all the exclusive bonus material) will only be online for 72 hours! Visit the YA Scavenger Hunt page for all the details about the hunt including a information about all of the participating authors and the full list of prizes.   There are SIX contests going on simultaneously, and you can enter one or all!   I am a part of the RED TEAM —but there is also a blue team, a gold team, a green team, an orange team, a teal team, a purple team, and a pink team!   The prize for each time is a different set of books.   THE PUZZLE Directions:  Below, you'll notice that I've listed my favorite numbe
5 comments
Read more