Welcome to YA Scavenger Hunt! In this post, you’ll find exclusive content from YA Scavenger hunt author Lyn Miller-Lachmann, along with a clue for Red Team.  Add up the clues, and you can enter for our prize—one lucky winner will receive a book from each author on the hunt in my team!  (Including a copy of my new book, Faceless!) 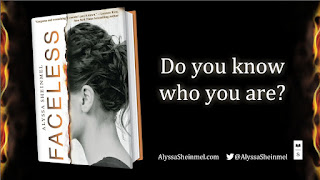 But play fast: this contest (and all the exclusive bonus material) will only be online for 72 hours! 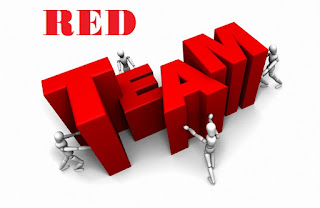 Visit the YA Scavenger Hunt page for all the details about the hunt including a information about all of the participating authors and the full list of prizes.  There are SIX contests going on simultaneously, and you can enter one or all!  I am a part of the RED TEAM—but there is also a blue team, a gold team, a green team, an orange team, a teal team, a purple team, and a pink team!  The prize for each time is a different set of books.
THE PUZZLE
Directions: Below, you'll notice that I've listed my favorite number. Collect the favorite numbers of all the authors on the blue team, and then add them up (don't worry, you can use a calculator!).
Entry Form: Once you've added up all the numbers, make sure you fill out the form here to officially qualify for the grand prize. Only entries that have the correct number will qualify.
MEET LYN MILLER-LACHMANN
Today, I’m hosting Lyn Miller-Lachmann! 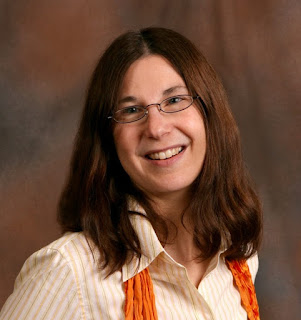 Lyn Miller-Lachmann is the author of Gringolandia (a 2010 ALA Best Book for Young Adults), Rogue, and Surviving Santiago. She works as a translator from Portuguese and Spanish to English and recently translated the picture book The World in a Second from Portuguese, with other books from Portugal and Brazil in the works. She has an M.F.A. in Writing for Children and Young Adults from Vermont College of Fine Arts and an M.S. in Library and Information Science from the University of Wisconsin. She is the former editor of MultiCultural Review and has taught English, social studies, and Jewish studies at the middle and high school level. Originally from Houston, Texas, she currently lives in New York City.
Learn more about Lynn on her website http://www.lynmillerlachmann.com/surviving-santiago/ and buy her new book here!
SURVIVING SANTIAGO by Lyn Miller-Lachmann 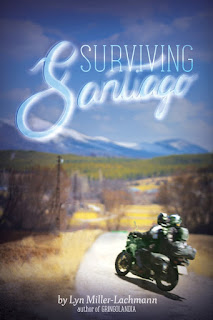 Santiago, Chile, 1989: the last place 16-year-old Tina Aguilar wants to be. Tina is forced to visit her father for the first time in years at his request following her parents' divorce. Still, she doesn't understand why he spends all his time with work, politics, and alcohol rather than getting reacquainted with his daughter. Fortunately for Tina, a cute motorcycle-riding local boy has taken an interest in her, though his presence is far from incidental or innocent.
In this companion to the critically acclaimed Gringolandia, Lyn Miller-Lachmann spins a tale of deception, love, and redemption set during the final tense months of the Pinochet dictatorship.
“Smooth dialogue, a quick pace, and palpable suspense combine to make a compelling read…A riveting story of love and acceptance amid a tumultuous political landscape.” – Kirkus
EXCLUSIVE CONTENT
Below is a deleted scene from Surviving Santiago, one of eight tapes recorded during the time the story takes place and discovered near the end.
Tape Five, Monday 3 July 1989
El Capo/Romeo
El Capo: Good evening, Romeo. How is your plan coming along?
Romeo: Good news and bad news, sir.
El Capo: Start with the good news. I like good news.
Romeo: This flyer. The target is speaking at a demonstration.
El Capo: No. Too many witnesses.
Romeo: The demonstration’s illegal.
El Capo: So what? Nobody bothers with illegal demonstrations these days.
Romeo: Can’t we get some friendly carabineros to bust it up?
El Capo: Don’t be stupid. We need hard evidence, like an incitement to riot. Pick up something off his desk, something he’s written.
Romeo: That’s going to be tough. The girl…you see…uh…
El Capo: What happened?
Romeo: Well, she broke up with me.
El Capo: Imbecile! Why?

Romeo:  I took her on my deliveries—
El Capo: And why would you bring her with you?
Romeo: She asked me. She sits at home all day with nothing to do because the target’s always working. And I didn’t have the marijuana for her. I thought she’d lose trust in me because I didn’t come through for her in her hour of need.
[INHALING SOUND, LAUGHTER]
Romeo: It’s not funny, sir. I had to show I cared about her.
El Capo: You do not bow to whatever ridiculous request the girl has.
Romeo: I thought she could help me too. What she calls a “win-win.”
El Capo: Gringo nonsense. Go on.
Romeo: I asked her to watch my motorcycle so I wouldn’t get a ticket. But I ran into an old friend who works in one of the office buildings. Señorita Aguilar got jealous.
El Capo: This is worse than I thought. Don’t get your friends from your neighborhood involved in our mission.
Romeo: I told her it was nothing, but she wouldn’t listen.
El Capo: The other girl. Was she the one I caught you with last year?
Romeo: Yes, Sofia. It was the first time I’d seen her since. I swear. She’s not my type anymore.
El Capo: And who is your type these days?
Romeo: Uh, someone with more brains. Likes the same stuff I do. Seen the world. And a little less, uh, used up.
El Capo: So you’ve become a real romantic.
Romeo: I guess I’m looking for something different.
El Capo: You can go girlfriend shopping when your mission is finished. Your job now is to get Señorita Aguilar back. You need to find out what the target’s going to say at that demonstration.
Romeo: I can’t even talk to her on the phone.
EL Capo: You called the house?
Romeo: I wrote down the number one day when I was there.
El Capo: So you can tip them off? How many times did you call? And who answered?
Romeo: Uh…five…maybe six times. The housekeeper answered twice. A man, I think the target, once. As soon as someone answered, I hung up.
El Capo: So now he’s going to put a trace on his phone.
Romeo: I called from pay phones. Different ones each time.
El Capo: Then you’re not as stupid as I thought.
Romeo: I’ll keep trying, sir.
El Capo: Good…And one other thing.
Romeo: Yes.
El Capo: How many ex-girlfriends do you have, Romeo? I don’t want this happening again.
Romeo: Besides Sofia, three others. Maybe you should let me bring Señorita Aguilar here. So we don’t have to go out in public.
El Capo: And why did I not want you here with the other girl?
Romeo: We keep everything in the office. And the door locked.
El Capo: Hmm… You might be on to something…All right. [CLINK] Here’s a key to the apartment. I’ll leave the contraband you requested under the sink, behind the powdered cleaner. Don’t mix them up.
Romeo: I won’t.
El Capo: Yes, you might. So listen. The contraband is in a baggie. The powdered cleaner is in, you know, the cardboard cylinder labeled “powdered cleaner.”
Romeo: Got it. May I have some videos and the Nintendo, too?
El Capo: I thought you’d have other plans for her.
Romeo: She’s a little…uh…young for me. And more into movies and video games and stuff.
El Capo: Fine. The sooner you carry out your mission the sooner you’re rid of her for good.

And don't forget to enter the contest for a chance to win a ton of signed books by me, Lyn Miller-Lachmann, and more! To enter, you need to know that my favorite number is 17. Add up all the favorite numbers of the authors on the red team and you'll have all the secret code to enter for the grand prize!
CONTINUE THE HUNT
To keep going on your quest for the hunt, you need to check out the next author, Rin Chupeco!
And big thanks to Colleen Houck for putting the hunt together!

March 08, 2016
The annual New York City Teen Author Festival is almost here!   I’m so excited to be participating in a panel with a group of amazing authors on March 19th at the New York Public Library– details below! Check out the full schedule of events here . Teen Author Symposium Saturday, March 19th 1pm-5pm Bartos Forum, New York Public Library, Fifth Avenue at 42nd Street 1:10-1:40 – What Can YA Do About It? A discussion of how YA literature (and literature in general) can help social change, and the role this plays in works across a variety of genres. Featuring: Michael Buckley Donna Freitas IW Gregorio Brendan Kiely Daniel José Older Marie Rutkoski Scott Westerfeld Moderator: David Levithan 1:40-2:30 – The Secret YA Lives of Historical Figures In the spirit of Hamilton, let’s look at different historical figures through a YA lens. Featuring: David Arnold Sharon Cameron Heather Demetrios Jeff Hirsch AR Kahler Emmy Laybourne Hannah Moskowitz Meliss
Post a Comment
Read more